Rough Start, two words that can sum of the first optimistic day of our Alsace journey. The sun was shinning, the skies were blue and full of good intentions and we ---- were ready to ride. We spotted the infamous orange TTV trail signs and headed in that direction. The trail followed a well paved road that wounded its way down to the nearest valley. This was easy, too easy. It was only until we reached the bottom of the valley when our inner doubts began to rumble and we stopped to scratch our heads.

We spotted a kind couple watching their son play football and headed towards them. After several minutes of staring at the map frontwards, backwards, sideways and upside down; the four of us concluded that we took the trail in the wrong direction. We would have to ride back the way we came and start at the beginning again. This added a 300 meter climb and 14km to our first day. Despite the big hiccup, we were quite optimistic and cheerful. We gladly climbed the hill and wrote it off as a step in our adventure.

There was a lot of climbing over the next several hours and by several i mean nine hours all together. These climbs were often in the right direction but too often they were also in the wrong direction. We soon learned that this region was not well marked and in several areas not marked at all. Thankfully, Laurent had the foresight to print out maps for each stage of our three day ride which ended up steering us back on track on many occasions.

We both knew that this was going to a be a challenge for me (Casandra), as I had never done so much in my life and had not ridden much that Summer. We were both coming back from a food-water borne illness, so we went into this adventure with no expectations but hard fun. I kept telling myself to take it easy, keep a low gear and just keep pedaling. Laurent was always waiting at the top or bottom of a hill to take pictures and cheer me on.

We kept this momentum but staggered a bit when I had a fight with the sidewalk and I am embarassed to say that the sidewalk won. Somehow as I was clicking back into my pedals and riding off the sidewalk onto the road, my bike slipped on a loose brick. When I went to put my foot out, my shoes slid on the bricks and I lost my balance being unable to unclick my left foot. The result, I went down hard, eating most of the sidewalk with my right side. My hip, elbow and knee were much worse for the wear but I knew crying wouldn't help. No broken bones meant that I could keep riding and let the blood dry on its own.

We were nearing the end of our climbs and preparing to work our ways toward our final descent for the day. First we had to stop and take a peak at a cool ruin on top of the hill we just climbed. No sooner had we finished standing their in awe, rain drops began to dance on our helmets. We quickly packed our electronics in our covered backpacks and took off into the dark woods. Thunder soon began to compete with lightning and we pedaled faster. Along our descent we saw a women taking shelter under a tree. She decided to tackle her hike in shorts and sandals. I told myself, "Hey, atleast I have a rain jacket and can get out of these dark woods faster than she can walk out. Could always be worse".

We made it off the mountain and the rain settled into a drizzle. We traveled along the bike path in twilight hoping to avoid cars. This proved to be a wise choice as we discovered this region was not always bike friendly on the roads.

We reached our hotel and began to peel off our wet shoes and jackets. It was close to 8 o'clock and we were ready to eat. We quickly put the bikes into the van and rushed into our outdated hotel for a quick rinse and dinner. We were both so knackered, having been on the bike all day that I think you could have put garbage in front of us and we would have eaten it. I made sure to clean the cuts and scraps from my right side and knew I would be sleeping on my let side. Despite the rough start we both had a blast and were ready for day two! 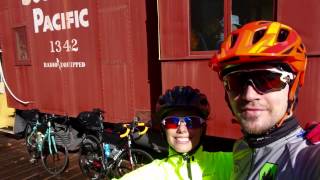 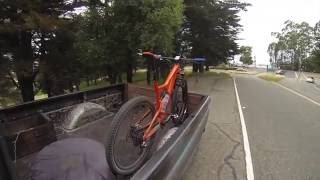 The new Ripley is here!